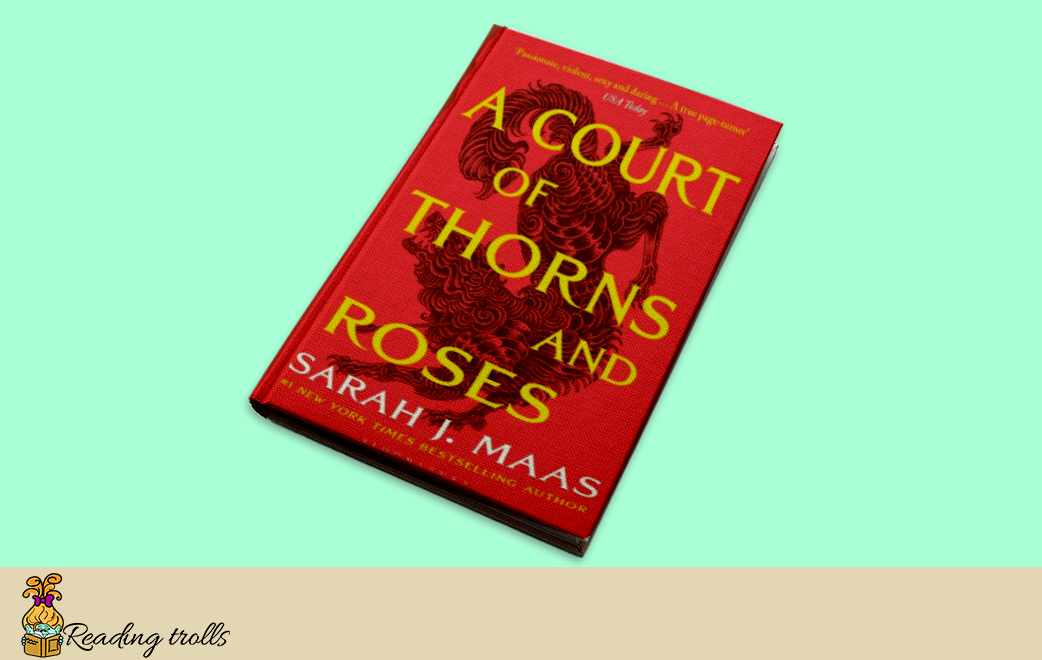 Book: A Court of Thorns and Roses

A Court of Thorns and Roses

She takes a life. And now she must pay for it with her heart.

When nineteen-year-old Feyre kills a wolf in the forest, a beast appears, demanding revenge. She’s been kidnapped to a magical land she’s only heard about in legends. Feyre finds out that her kidnapper is not a beast, but Tamlin, one of the immortal and deadly elves who once ruled the world.

As she inhabits his castle, her feelings for Tamlin turn from icy hostility to burning passion, throwing to the wind all the lies and warnings she has heard about the wonderful and dangerous world of the elves. But an ancient and ominous shadow lies over these lands, and Feyre must find a way to stop it…or Tamlin and his people are doomed forever.

A Court of Thorns and Roses

is the first book I have read by Sarah J. Maas. Surprisingly, it’s my first in the fantasy genre. My dear friend Gincheto kept asking me to read it, and during the pandemic I finally picked it up. Now I do not regret it for a minute. Although I was very biased at first, there is just something about this book that keeps you reading. So engrossing and suspenseful until you get red and tired eyes and the hour is long past bedtime. The first thing that won me over about the series was the distribution of the elves lands. The courts hide the magic. Not only is magic abundant, it springs from each court.

Plot of A Court of Thorns and Roses

The story is set in a fairy tale world of elves and humans called Prythian. Therefore, no one crosses the invisible wall that separates the realm of elves from that of mortals.

Our heroine, through whose eyes the plot unfolds, is an ordinary human, fragile and insignificant to the world. Feyre is a child, only nineteen years old and forced to save her family. Faced with the threat of starvation, she is forced to hunt in the dangerous forests near the border of the land of the elves. When she is overcome by fear and despair while hunting one day, Feyre killed a creature that has come over the wall. The death of the giant wolf changes her life. Retribution is exacted for the creature’s life, and Feyre is drawn by legends into the land of deadly elves and terrible creatures. The story moves along fairly quickly and is reminiscent of the fairy tale of Beauty and the Beast. Well, at least that’s what I thought at first.

“You want to know the truth, girl?” Well, here it is: she took him away because of the curse, because seven times in seven years have passed, and he failed to break her curse. This time, she’s gathered all her great masters to see him break it… “

Feyre’s life in the realm of the beast elf Tamlin quickly reveals a dark secret. Prytian is in danger, threatening not only the realm of the elves, but the world of humans as well. Our heroine goes through various challenges and dangers that keep us on edge throughout the book. The fact that we are writing this review after reading the book for the second time is enough to indicate that the book is fascinating. The way Sarah J. Maas reveals to us the thoughts of Feyre and how she slowly finds out the truth about the Court of Spring and the Supreme Lord keeps the reader engaged. The heroine is filled with hatred and fear of the Elves. She has heard the stories of the cruelty of these creatures, and already in this world she is confronted with their horrors. Yet she manages to fall in love and discover its beauty. And the power of her love must be enough to save Tamlin and Prytian.

“Some have searched for me all their lives and still cannot find me,

others I kiss, and they grind me to dust.

Sometimes I touch those with beauty and wisdom,

but I always cherish those with boldness.

My hand is tender when I am accepted,

but if I am rejected, I can kill a man.

Each of my blows is glorious,

The power of will and love

The story of the mortal girl who is physically vulnerable in this world of titans is fabulous. Strong, fierce, and rebellious, Feyre is ready for anything, and though she has many weaknesses, she is a character who inspires sympathy. The strength of her will and her ability to survive make her a strong female character. Tamlin’s character is the typical prince that any girl would fall in love with. The typical man who wants to defend his possessions and save the damsel in distress. Strong, handsome and brave, Supreme Master, whom his people love and follow unconditionally. Our Beast, who is the reason Feyre faces the ancient evil that threatens her world.

Still, there is something I did not …….

Still, there is something I did not like about his picture, and that is the change he underwent when he found himself in the bowels of the mountain. All the silence and the stoic look with which he follows the trials of the woman he loves is not something I can appreciate in a male image. On the other hand, Rhysand as we already told you, we love these villains, but he’ll be the subject of the next review.

A Court of Thorns and Roses is a book with an interesting, fairy tale story about the power of love facing impossible obstacles. I did not wait a day before starting the next book.