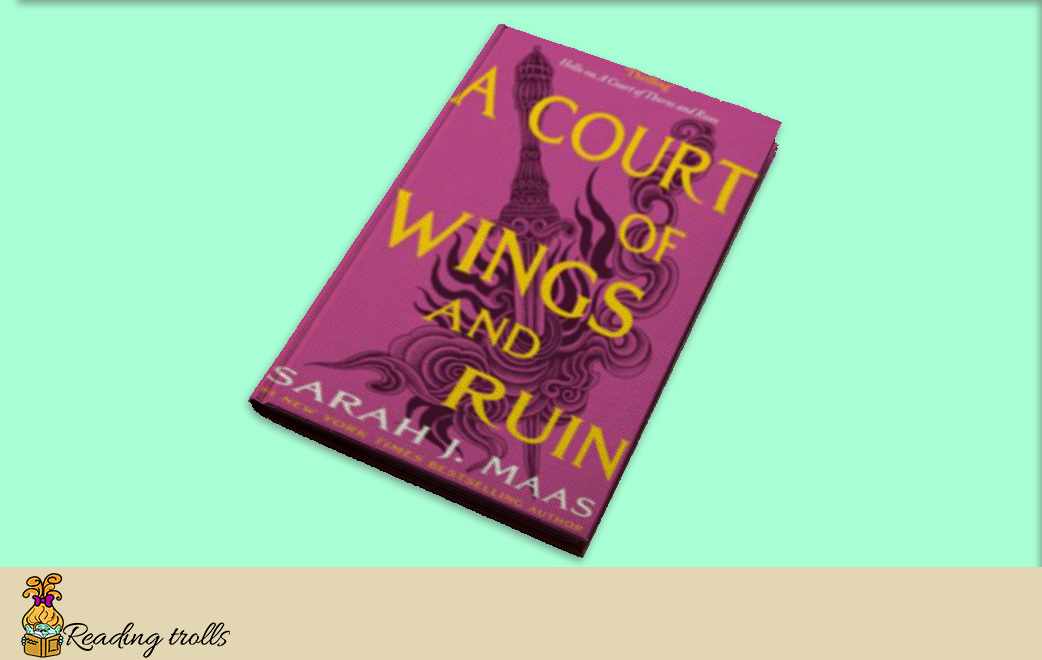 Book: A Court of Wings and Ruin

A Court of Wings and Ruin

“A terrible war threatens everything Feyre loves. She returns to the Spring Court, determined to gather information about the plans of Tamlin and the King of Hybern, who threatens to bring Prythian to its knees. But to do so, she must engage in a deadly game of stretch and trickery, where even the slightest stumble can play a foul trick on her.

War terrifies everyone, and Feyre must weigh which of the dazzling and deadly High Lords she can trust – and find allies in the most unexpected places. In the thrilling third book of Feyre’s story, the earth will be dyed red as mighty armies battle for power over the one thing that can destroy them all.”

The anticipated sequel – A Court of Wings and Ruin

“A Court of Wings and Ruin” is a book that many of you probably could not wait to start. After the ending of “A Court of Mist and Fury” and the unexpected twist, we are all trembling for the fate of Feyre. The threat of Hybern is deadly. The evil king has proven that he cannot be underestimated, and defeating him will cost her everything.

The book opens with Feyre’s dastardly revenge on Tamlin. An action we find completely unnecessary, as he bears no blame for Nesta and Elaine’s fate. However, their stay at the farm in the spring heats things up further and reveals many interesting things about the past of their favorite characters.

In “A Court of Wings and Ruin” we get to know Rhysand’s inner circle in more detail. The dark past of his family and the victories over their destiny. Each of them lives with their memories haunting and tormenting them. But the support they have as they fight together against each evil is the strength that keeps them going. An invincible team that will once again face a war that threatens everything they hold dear.

The great lords of the court by night

Feyre is already the Great Mistress of The Night Court. We meet again the strong and fierce heroine from “A Court of Thorns and Roses.” The insecure girl that Tamlin wanted to lock up in his castle has disappeared. The destroyer of curses has managed to unravel the devotion of the elves of The Spring Court without thinking about the future. About Tamlin’s role in the war. Feyre is the base in the fight against Hybern. It unites the forces of all the Great Lords and is the key to destroying Cauldron. But they will need much strength to defeat Hybern’s army, which is much larger than that of our heroes. This will force them to release an ancient evil that has been locked in their world for many years.

“Only you decide what will break you, Destroyer of Curses. Only you.”

The image we have of Rhysand is different in this book. We are used to seeing him as arrogant and confident, always one step ahead of his enemies. In “A Court of Wings and Ruin”, the focus is on the shards of his soul. It’s a shame that this Rhys, who our covenants were modeled on, was lost at the expense of the tolerant, self-sacrificing, spiritually ruined Great Lord of the Night Court. Perhaps it would not have irritated us so much if Feyre had not been constantly trying to boost his confidence and keep him happy.

“I see all of you, Rhys. And I love every part of you with all my being. “

We suspect many people would disagree with that sentiment, but it was better for Rhysand to remain the previous bastard. It was clear enough to us that he had a good heart, and with all the row upon row of soul infusions, his image was fading and losing its original appeal.

In this book, we meet another bastard. Nesta, the mortal girl who was forcibly turned into an elf. The image of a big sister has always raised questions. Why did not Tamlin succeed in enchanting her? Why and from where comes all the malice in this fragile body?

When she entered the cauldron, she promised death to the King of Hybern and would find her place in the city of Starlight to make good on her threat.

We also want to talk about Cassian. It is very important for us to give our opinion on the image of this warrior. We always see the commander-in-chief of the armies of the court balanced at night. He gives his all to people who feel like family. In battle, however, he is death to his enemies. It’s as if he was born for it all – for the battlefield, for the chaos, for the brutality, for the wide-eyed assessment of events. It is as if he breathes in the rhythm of war. For him, battle is a symphony. He believes that if he dies defending those who need his help, he will not have died in vain. Cassian is a worthy fighter and friend.

The plot is a jumble of small challenges that our characters have to overcome. Revelations about their past are combined with their current trials. All the pieces come together to form a whole. New relationships are formed between the characters, and others are forever destroyed. Sarah J. Maas’ trademark of surprising us with plot twists is evident in this installment of the series. She always manages to pleasantly surprise us and keep the suspense going until the very end. And “A Court of Wings and Ruin” is not the end of the story for Prythian.

Published May 2nd 2017 by Bloomsbury Publishing