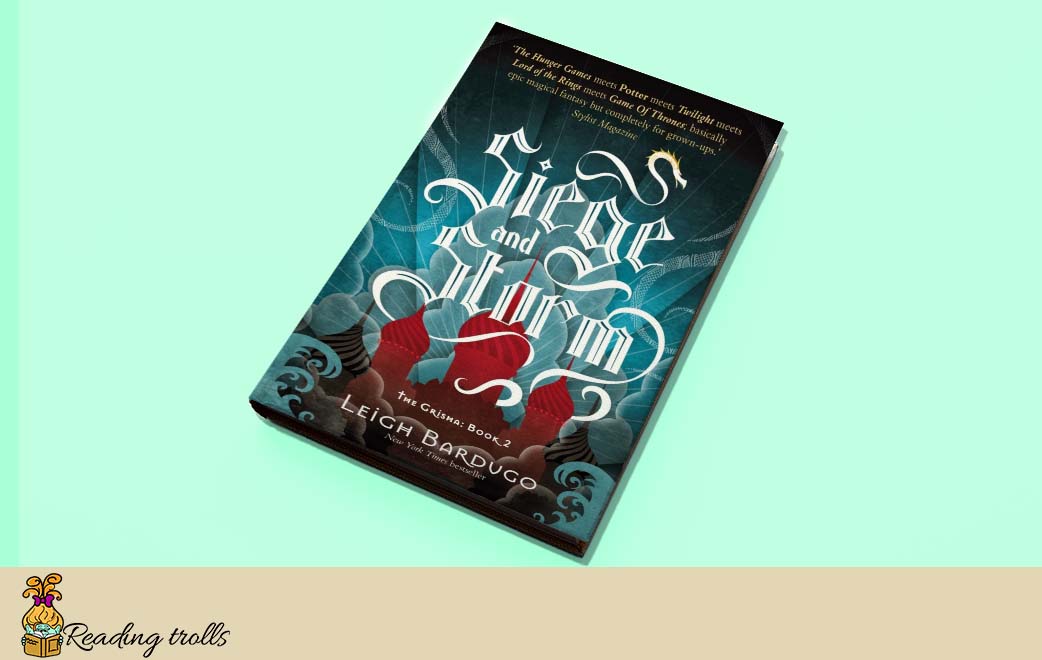 Hunted across the True Sea, haunted by the lives she took on the Fold, Alina must try to make a life for herself in a strange land with Mal while keeping her identity as a Sun Summoner a secret. But she can not run from her past or her destiny for long.

The Darkling has emerged from the Shadow Fold with a terrifying new power and a dangerous plan that will test the limits of the natural world. With the help of a notorious privateer, Alina returns to the land she left, determined to fight the forces gathering against Ravka. But as her power grows, Alina finds herself deeper and deeper into the Darklings’ game of forbidden magic and further and further away from Mal. Somehow, she must choose between her land, her power, and the love she always thought would guide her-or risk losing everything to the gathering storm.

THE REVIEW CONTAINS SPOILERS! READING IS AT YOUR RESPONSIBILITY!

“Are you afraid of me, Alina?”

I think that’s what you want. -this swap meet

Our heroes took a journey across the True Sea back to Ravka, along with his most loyal Grisha. On the ship, Alina and Mal met Sturmhond, a pirate and mercenary.

The Darkling has not yet given up his ambition to control Ravka, and he needs Alina and Morozov’s three amplifiers to do it. Separated from each other again, our characters are put to the test one more time. The Black Lord threatens to kill Alina, and Mal breaks down. The Darkling has realized that only he is capable of tracking Morozov’s herd and wants him to track down the second one, the sea monster. To do so, however, they must enter  a long stream of black water that has caused countless ships to crash. No one knows what will happen when the tracker finds the ice dragon and the two muskets come together.

What will happen to Alina?

How will the Darkling control her power?

Desperate times call for desperate means. Alina swallows her ego and seeks help from a pirate but hits a rock. She realizes that the one who pays orders the music, and she and Mal are forced to hope for the Darkling’s mercy.

“… -I am known for not taking shit from anyone. So if a talking dog is not in your story, I will not listen to it. Or will you? What are you going to give me? A talking dog? No, I have stumbled across him. It’s about the future of a kingdom and its people. “That’s a pity,” he replied.”

Mal, with his unerring judgment, recognizes the sea monster before the end of his term. But then the situation turns 180 degrees. Completely surprising and typical of the author’s style, there is an about-face, and Stormhund turns the leader over to the Grishans. Alina and Mal put their faith in the privateer. But they have no idea what the Darkling is capable of. His power is darker than ever.

The image of the ruthless pirate Stormhund is shrouded in mystery.

Alina takes the Darkling’s place leading the Second Army. After undeserved hostility from the King and Queen, a proposal for political unification, distrust, and strange apparitions, she is ready to fight back. But none of them suspect the king’s son, is about to ascend the throne, clearing the way for the Darkling.

The army, the Small Palace, the Grishans – all their plans are thwarted…

Siege and Storm – Book Two of the Shadow and Bone Series

“Siege and Storm” is a worthy sequel to the first book, “Shadow and Bone”, and stakes a strong claim as the conclusion to the trilogy of the same name. Leigh Bardugo succeeds in challenging the Darkling’s image, building up the distinctively arrogant, patriotic Nikolai, and further developing the relationship between Mal and Alina. Take a trip to Ravka, see it through the author’s eyes and enjoy her writing style. Also from the series is “Ruin and Rising”