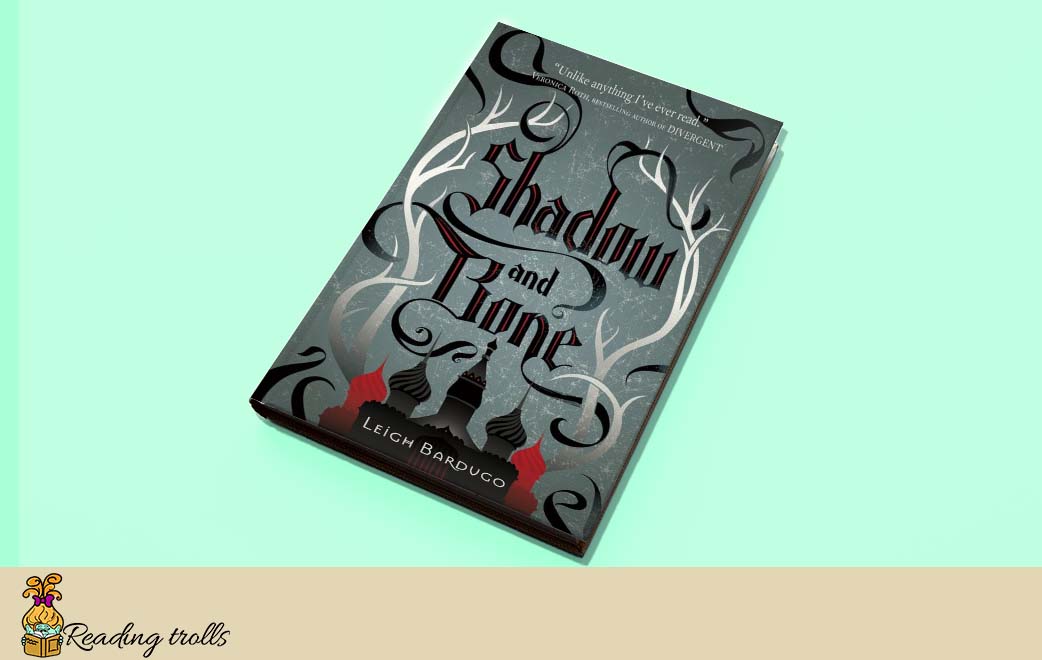 Surrounded by enemies, the once-great nation of Ravka has been torn in two by the Shadow fold, a nearly impenetrable darkness teeming with monsters feasting on human flesh. Now the fate of the land may rest on the shoulders of a lone fugitive.

Alina Starkov has never been good at anything. But when her regiment is attacked in the fold and her best friend is brutally injured, Alina discovers a dormant power that saves his life-a power that could be the key to freeing her war-ravaged country. Torn from everything she knows, Alina is whisked away to the royal court to be trained as a member of the Grisha, the magical elite led by the mysterious Darkling.

But nothing in this lush world is as it seems. With darkness looming and an entire kingdom depending on her untamed power, Alina must face the secrets of the Grisha… And the secrets of her heart.

THE REVIEW CONTAINS SPOILERS! READING IS AT YOUR RESPONSIBILITY !

The first book, “Shadow and Bone”, from the trilogy about the world of Grisha introduces us to two orphans, Alina Starkov and Malyen Oretsev. Like most orphans in Ravka, they are in the care of Prince Keramzov and under the direct “subordination” of Anna Kuya. They live the life of typical frontier war orphans and quickly find a way to each other, becoming a support and the only refuge for the other.

The world of Alina and Mal

Each year, new Grishans travel across the country to test the orphans if they have needed skills to join them. The gifted children are taken to the Little Palace where they can learn the secrets of small science. Mal and Alina are tested and find no hidden talents in them.

Years later, they are serving in the Second Army taking various positions. Alina is not very talented cartographer, and Mal is the best of the best trackers in Ravka. Alina is strongly attracted to her long-time friend and life partner, but it seems her feelings are not shared. While she is rather “invisible”, he is the complete opposite, arrogant and successful in every endeavor.

Welcome to the world of Shadow and Bone and the Valley of the Dead Shadows.

Her life in the military was relatively tolerable until Alina and Mal had to join the Second Army and cross the Shadow fold with the Grishans. Darkness and fear rage in Unsea. The only inhabitants of the valley are the volcra, who sniff out their prey in the darkness and suddenly attack because they thirst for human flesh.

Here we already get to know the troops of the Corporalki, the Etherealki and the Materialki in detail. They all wear distinctive caftans that show the power they possess. The Darkling, the most powerful Grisha known to the world, also appears on stage. His image is shrouded in mystery; he is both an eerie and attractive figure. The Darkling’s color is black, only he can wear a caftan of this color.

While transitioning through Unsea they are attacked by the volcras, they are on the brink of death and it is at this moment that Alina unlocks her gift. No one has ever seen anything like it, an explosion of light, like the sun at its zenith. The volcras, used to living in darkness, recoil, but Mal is badly wounded. Terrified of her strength, Alina is chained up like a brigand and taken to the Darkling’s tent, where she is tested again by him.

The Little palace – Shadow and Bone

Alina’s life turns 180 degrees. Until yesterday, unnoticed today, she was recognized as Grisha. Frightened and terrified to part with Mal, her loyal friend, her eternal support, Alina is taken to the Little palace to learn the secrets to become one of the Grisha.

She does not find the expected support and friendship in the Grishans’ possessions, and her separation from Mal affects her emotional state even more. Unable to control her power, she feels overwhelmed by everyone’s hopes and expectations that she will help the Darkling destroy the Valley of the Dead Shadows.

Not long after, the orphan realizes her belonging to Grisha. Here she is among her own kind. Here she found her place and is no longer insignificant. She manages to master her powers and presents herself more and more successfully to the other Grisha. But the more she gets used to her life in the Little Palace, the more she feels attracted to the Darkilng. “They are made for each other,” the Black Lord tells her.

‘Is that true or not?

And just when you think you know the end of the story and the happy ending has taken shape, Leigh Bardugo does what she does best and shakes you to your core. Completely unexpectedly, Starkov’s teacher Baghra is the one who reveals the truth about her benefactor’s plans. Alina is confused, wavering between common sense, her feelings to Mal, and her burgeoning attraction to the Darkling.

Will she succeed in escaping the Black Lord?

Will she succeed in breaking the darkness in the valley?

Will she meet Mal again?

Shadow and Bone is my first book by Leigh Bardugo

Book one “Shadow and Bone” is an exciting story of love, fear and friendship. Dive into the world of Leigh Bardugo and unravel the story to the end in book two “Siege and Storm” and book three “Ruin and Rising“.