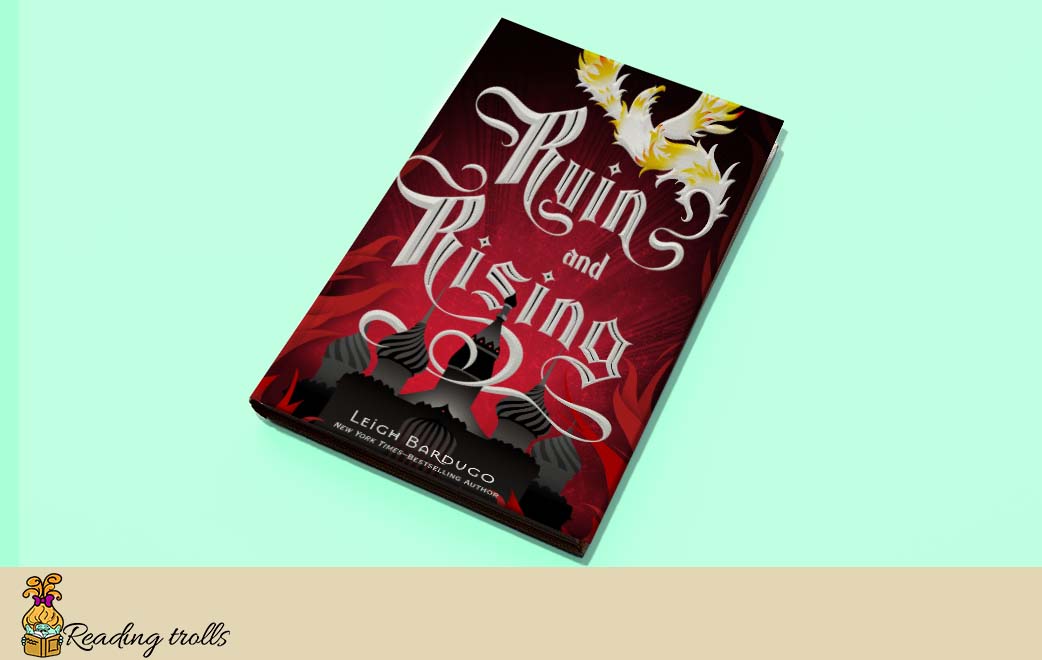 Series: The Shadow and Bone Trilogy

The capital has fallen. The Darkling rules Ravka from his shadow throne.

Now the nation’s fate rests with a broken Sun Summoner, a disgraced tracker, and the shattered remnants of a once-great magical army.

Deep in an ancient network of tunnels and caverns, a weakened Alina must submit to the dubious protection of the Apparat and the zealots who worship her as a Saint. Yet her plans lie elsewhere, with the hunt for the elusive firebird and the hope that an outlaw prince still survives.Alina Starkov will have to forge new alliances and put aside old rivalries as she and Mal race to find the last of Morozova’s amplifiers. But as she begins to unravel the Darkling’s secrets, she reveals a past that will forever alter her understanding of the bond they share and the power she wields. The firebird is the one thing that stands between Ravka and destruction—and claiming it could cost Alina the very future she’s fighting for.

THE REVIEW CONTAINS SPOILERS! READING IS AT YOUR RESPONSIBILITY!

The Ruin and Rising of the “Shadow and Bone” trilogy is as if created by a Whirlwind, a whirlwind of battles, fantasy, romance, self-sacrifice and personal retribution.

Alina barely saved by Mal, loses everything she fought for. The Darkling rules Ravka, and Nikolai has disappeared. Her life is safe thanks to Apparatus, but what is the cost? Sancta Alina finds herself in a religious prison, and the chief jailer is the man who saved her from death.

Alina realizes that the weaker the priest sees her, the faster she will get out of the trap into which she and the others have fallen after the attack of the Darkling. The Sun summoner further strengthens the image of a martyr and through a cunning plan they manage not only to break free from the clutches of the priest, but also to be sent with wishes of success by all believers. Thinking that the third amulet was their last chance to oppose the Dark lord and save Ravka, they set off in search of the Firebird.

Their path is littered with obstacles, and they are again attacked by enemy forces. Pressed to the wall and almost on her knees, Alina Starkov realizes that she is not the hunter, she is the prey. As a dream comes their salvation – Nicholai. The young Lantsov defeated the enemy and, together with our well-known company, boarded the Pelican, leaving behind not a single living witness to confirm that the Sun Summoner had returned.

Hidden high above the clouds, they manage to take a breath of fresh air, but the feeling of security quickly evaporates. Betrayed by their own, they are discovered by the Darkling. They are on the verge of failure again… Then a mother decides to sacrifice herself in order to stop her own child and be able to give Alina the lead. Sancta Alina must discover the truth about the Darkling. The secret that Bagra previously shared haunts and makes her ask herself many questions, the answers to which she does not know if she can bear.

Their loss agai is devastating. Losing everything dear, not only ships and hope to fight, but also their new home, the place where they felt safe. The Darkling is uncompromising and pours his anger on Nikolai. The lord of darkness pours darkness into him, black and cold, and Lantsov becomes a bloodthirsty monster. They embark on another attempt to equalize with the Darkling. But? Is the third amulet the answer? Isn’t the secret in Morozova’s blood?

Will Alina be able to do what is necessary? Is Orettsev ready for sacrifice? What is the fate of Nikolai, and will he find the human in himself again?

Faced with so many unanswered questions, they head to the Fold, hoping for victory. Everything is at stake, but who will be with the better hand?

Frankly about “Ruin and Rising”

This series was my first encounter with the author’s books, but it will not be the last for sure. Give them a chance and get to know Grisha’s world, because this is just the beginning.

My personal opinion of the series is relatively good. These are not books that will be read stubbornly. At least three series names read in 2020 pop into my head that I can’t remember the names of the main characters. I understand the author’s move to introduce us to the world and she does it more than successfully, but this sacrifice (OMG) torments me. Alina and Mal, the eternal victims of circumstances, if she does not throw herself into the fire, it will be him. The Darkling is a confused hero, and Nikolai, in my opinion, was the best character built by Bardugo. It is a MUST to read the trilogy if you are willing to read Six of Crows and Crooked Kingdom! If Shadow and Bone has become your favorite, hold on tight, because with the next books, Leigh Bardugo raises the bar much higher.