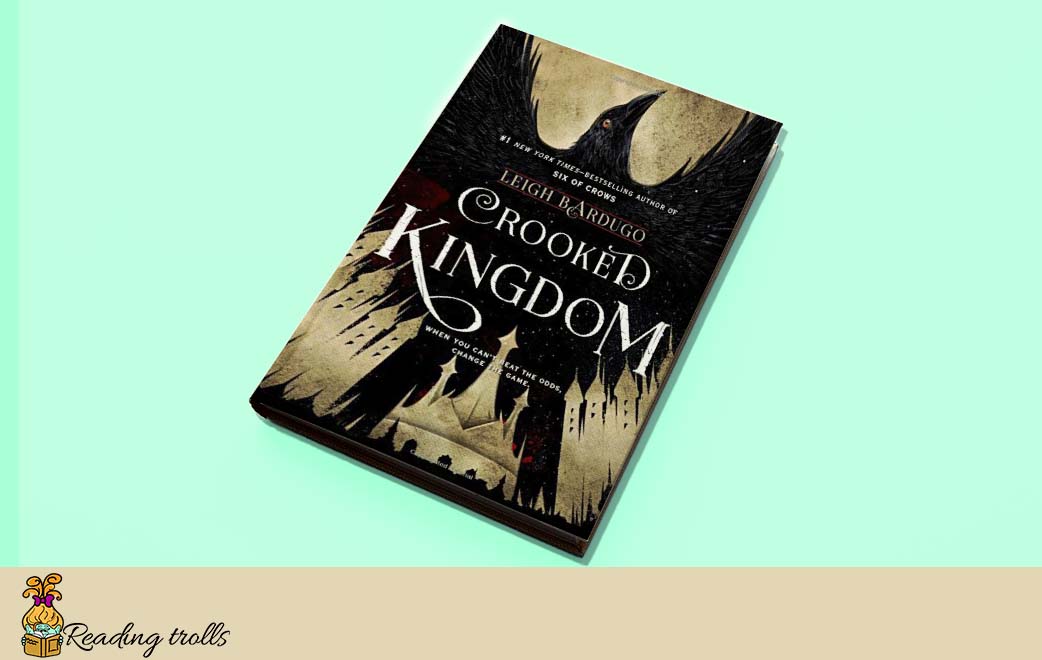 Welcome to the world of the Grisha.

Kaz Brekker and his crew of deadly outcasts have just pulled off a heist so daring even they didn’t think they’d survive. But instead of divvying up a fat reward, they’re right back to fighting for their lives.

Double-crossed and badly weakened, the crew is low on resources, allies, and hope. As powerful forces from around the world descend on Ketterdam to root out the secrets of the dangerous drug known as jurda parem, old rivals and new enemies emerge to challenge Kaz’s cunning and test the team’s fragile loyalties.

A war will be waged on the city’s dark and twisting streets – a battle for revenge and redemption that will decide the fate of the Grisha world.

Crooked Kingdom left a deep imprint in my heart.

Leigh Bardugo’s “Crooked Kingdom” I began with great impatience. After the end of “Six of Crows”, I was so shaken that I just had no intention of waiting. I can definitely say now that this is one of my favorite books, as well as the series, of course. The pages flew imperceptibly, each head was exciting.

”Crooked Kingdom”, “Six of crows” and the council of merchants.

At the end of book one, “Six of Crows”, Inej was abducted. It was the most unexpected ending that I hadn’t even thought Leigh Bardugo could serve us. They were played without the promised pay and extorted. What else could go wrong? But things became even more tense. In addition to rescuing Inej , new players have appeared in the city. News of the new drug “yurda parem” has spread and all kingdoms are looking for Kuwei.

The characters have already been fully built since the first book, but Leigh Bardugo continues to build on and develop them. New truths about their past are revealed and the characters somehow become complete. Do not think that the plot develops only in the past. Typically in the style of the author, things are revealed gradually and smoothly, in parallel with the current troubles of the characters.

Kaz is deeply shaken by the loss of Wraith. No matter how hard-hearted and unscrupulous he is, under the outer layer, there is something hidden in him, some feelings. On the other hand, Wraith is being tested. In Van Eck’s paws, she is on edge and begins to doubt that anyone will come for her. Many times it was Kaz who told her that it was nothing more than an investment. There is something unspoken between them that I could not wait to reveal.

Nina is struggling with her addiction

According to Kuwei, a single dose should not be addictive. Yes, but why is Nina thirsty for a new dose of “parem”? Something is wrong? Her strengths are different, distant. Even the basics cost her a lot of effort. Every attempt is painful and intensifies her desire. Matthias is inseparable from her – “I was born to protect you.” Although in the first part I had mixed feelings for him, here he definitely grabbed my heart.

Jesper – rejected by Kaz and struggling with his vices

Jesper is in disgrace. In a fit of rage, Kaz revealed that he was the reason they attacked them at the port before leaving for Fierda. Brecker will never forgive him that he is the reason to put Inej in danger. The gap between them becomes even more pronounced after another failure. Another failed plan. Jesper must deal with his guilty conscience, as well as be able to protect the only creature valuable to him – his father. To reveal the truth about his “illness” and to break his father’s heart? Will he be able to save the family farm? Will he protect his father from the evil forces that have risen in the city?

The period is extremely difficult for everyone. Threats are everywhere, but for Wylan it is a tough fight. He must discover the cruel truth about his mother’s death. He has to face his own father. Will Wylan be able to see Van Eck’s true intentions?

Crooked Kingdom against the Six of Crows

After it becomes clear that everyone wants Kuwei Yul-Bo, the characters are back in a dead end. New players appear on the table. Grishans in the city are persecuted by Shu Han’s infernal soldiers to be enslaved to the new drug “parem”. Kaz’s plan to save everyone has been revealed. Their lives are in mortal danger again. They no longer have a place to hide. Ribs are no longer their home. Prizes have been announced for their heads. They were betrayed by their brothers in arms “Sludge”. Will the thief with the gift of always getting away succeed again? Will he save all his friends?

It’s really hard for me to describe how much I liked the book. Leigh Bardugo has definitely settled comfortably in my heart, when in the future I will choose books to read, hers will definitely be my first choice.

The Crooked Kingdom had everything I was looking for in a book. There were intrigues, unexpected twists, breathtaking lines, love, grief…

Also, you may want to check King of Scars